Françoise Van de Ven has been a member of the GTF board since May 2016. She has supported several GTF-facilitated activities in Africa, including SME needs assessment research and a subsequent regional exchange in Douala and more recently organised & hosted the GTF West & Central Africa Summit.

Francoise has worked in the forest products sector for almost 40 years, half of which have been spent in Africa. She has been secretary general of Union des Forestiers Industriels du Gabon et Amenagistes (UFIGA) since October 2015 and previously acted as Secretary General of the Timber Industrial Federation, Fédération des Industriels du Bois in D.R.C. Françoise is also on the board of Association Technique Internationale des Bois Tropicaux (ATIBT), where she is actively involved in projects dealing with governance, transparency and legality issues.

Monday forestry thoughts: A forest is not valued only by the number of trees but the nature, biodiversity, wildlife and people it supports!

Meanwhile, check out the summary report from our recently concluded forestry study tour around the globe: https://t.co/2xkeqDBh4F 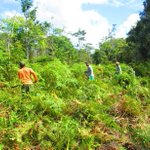 Watch how forest defenders in Indonesia use GLAD Alerts to detect #deforestation early enough to stop it in the Leuser ecosystem - the last place on Earth where orangutans, Sumatran rhinos and elephants and tigers still roam wild together: https://t.co/Xgr7IpUK95 @haka_sumatra

📌 With increased recognition of #agroforestry as a means to address many pressing challenges — such as food insecurity, land degradation, & the #climate crisis — demand for agroforestry experts is foreseeable yet the supply is lacking in Southeast Asia.
https://t.co/EXtfPBmptT

These groups are key partners in amplifying the voices of climate-vulnerable communities.

We look forward to continuing close work with them to deliver an inclusive summit.